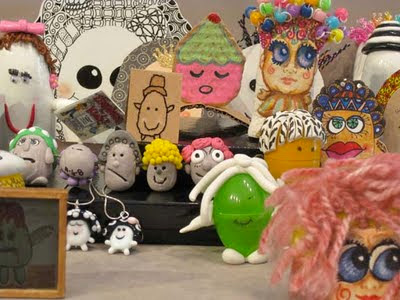 Wow! What an amazing group of Lilah Beans!! My army of minions... 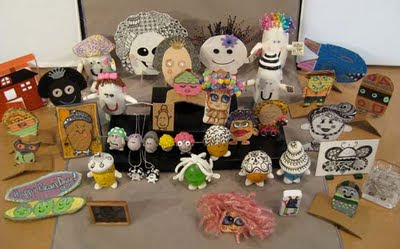 If you were expecting them to be in neat, efficient rows... you don't know your Beans! I had a hard enough time getting them to stand still for two seconds to take the photo. Lilah Beans are constantly moving and when they see all the others - there is pandemonium. So much to say to each other, and there were so many show-offs in this group. It was all "I have sproingy hair and you're bald!" and "So what if you have feet, I can stand up and you fall over." Mostly, they are a good-natured bunch though. 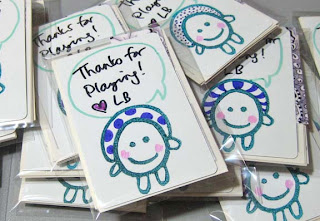 Before I introduce the winners, I just wanted to say "Thanks" to every one who entered and show you what I sent to everyone who sent a SASE. It's a pack of Tangle Trading cards with a hand-written note from Lilah Bean. Cool, right!

Angie Gamble's "Box of Beans" was clearly the winner according to the polls. Even if she hadn't offered to make me a "Botto Bean" (the robot Lilah Bean from the book!) - she still would have won. And in case you can't tell from the photos, these Beans are about 5 inches tall and hefty. That's a lot of Bean! Nice job, Angie!

THE HEAD BEAN's CHOICE AWARD (that's me) goes to Jenny Balson for her "Lilah Beads".  These two beads are so tiny and precious and completely capture the true essence of what it means to be a Lilah Bean. And I can wear them! So, cool. 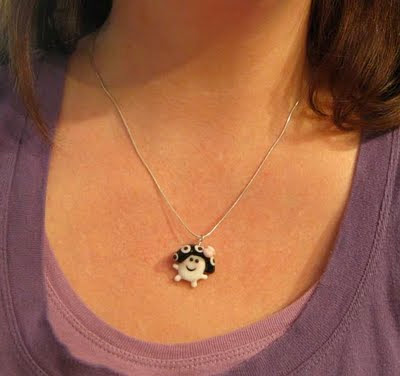 And some more awards...

THE BACHELOR BEAN AWARD goes to "Freddy" the domesticated Bean. What can I say, he wears a fedora, owns his own home, and knows how to sew... multi-dimensional. I'm in love. 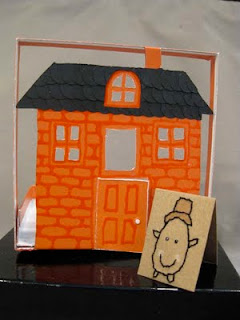 THE LATIN LOVER BEAN AWARD goes to "Latin L. Bean" who got quite a number of votes despite his late appearance. Typical Lothario. As you can see below, he is quite the she-Bean magnet. Nice textures. Lovely background. Great hair.

Speaking of hair... THE GREAT HAIR AWARD goes to "Shrinky Bean." Also popular in the polls, Shrinky Bean knows how to work with what she's got. She doesn't need color to highlight her sparkling (actually dull... lets say "matte finish," ok?) personality. What she lacks in depth, she makes up for in densely packed tangles. 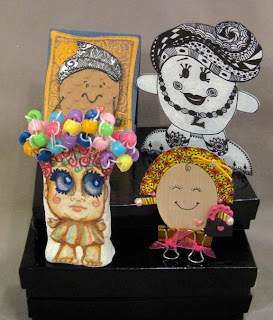 The balloon-haired "Boop Bean" wins the IF LILAH BEAN WERE HUMANISH AND LOOKED LIKE A TROLL DOLL AWARD! And snaps for the original up-do. Or is it an afro? Or gumdrops...

THE FASHIONISTA BEAN AWARD goes to "Sally Bean" for her fashionable, yet practical approach to footwear. It is not easy to be this glamorous and happy with shoes that pinch. She won't get far on the runway, but at least she's still standing.

Lastly, we have the HAPPY MINIONS AWARD. 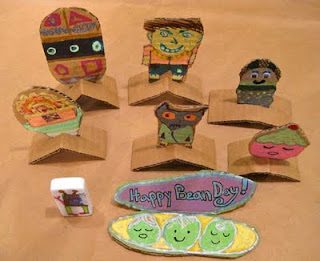 This award goes to the "Hungry Minions" which are a motley crew of Lilah Beans, friends of Beans, ah... snacks for Beans, and some sort of mix of all of the above. Despite their differences, the family resemblance is uncanny and there is a very strong sense of loyalty and trust amongst the ranks. I know this because, in the week they have been camping out in my studio, no one has so much as licked the frosting off that luscious little Cupcake Bean.
Nice work everyone!

The two top award winners will be getting their very own, super fabulous, highly collectible, authentic Zentangle® kits! Yeah! But that's not all, they will also each get a signed copy of my new book, Zentangle for Kidz!

The other winners of the Weird Bean Awards, will be getting some miscellaneous items that are lying around my studio... and, wait for it... a signed copy of my new book, Zentangle for Kidz!

I'll be mailing out your prizes tomorrow.
Posted by Sandy Steen Bartholomew at 7:27 PM

Oh WOW!!! I am soooo excited!!!!! Thank you so much Sandy. This was so much fun! I'm off to brag about my win on facebook now. Thank you!!

SQUeeeee! I'm honored to be a winner when the competition was so tuff! Thank you for your generousity in holding such a fun and fabulous giveaway!

Thank you! I'm so excited about my signed copy of the book. I will be using it to introduce tangles to my Gifted and Talented students. By the way, please know that although Latin L. Bean may appear to be flirty with the she-beans at times, he was raised to be very respectful. Blessings!

I can tell, by the lovely print in the background, that he has a sensitive side too.

Wow thanks!! Everyone did such an outstanding job on their entries it was hard to vote!

Congrats to all the winners! All the beans were amazing - kudos to everyone who entered!

This was a very cute contest... and all the entries were perfect Lilah Beans! Congrats to ALL who added a legume to the Army of Minions. Fun, fun, fun.

And, Sandy, I just love your commentary. You have a great imagination and a very special flair for expressing your fantasy world in words. Have you ever written a story book for children?

Tricia - too funny! I have been writing kids books since I was about 15. That's why this is my favorite tangle book - it's the first of my kids' books to actually make it all the way to print! Yah!

thanks for my excellent participation prize. I love thwe the little pin.Can't wait to wear it to school.I have been tangling during our before school starts meetings heeheeheehee

Sandy, thank you so much for the wonderful prizes! I love, love, love the official Zentangle kit & I love, love, love, LOVE the signed copy of your book!!! You are the BEST! :-) I loved playing in your contest and congrats to all the other winners! ALL the Lilah Beans were great! Thanks again so much! Angie