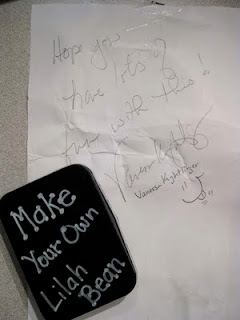 Vanessa Kightlinger sent the most dangerous of all the Lilah Beans. The "Make Your Own Lilah Bean" is an ingenious idea, but it seems that all the separate components combined during shipping and created a super-bean that crushed the tin and escaped from one corner. This is a metal tin - can you imagine the strength it took to rip the corner open!? 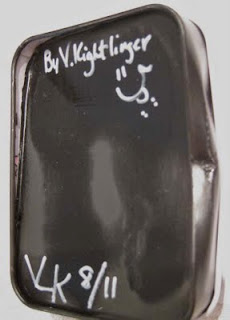 Just because I was not strong enough to open the box, doesn't seem a fair excuse to exclude this entry. Vanessa had posted some pictures of her Lilah Bean on her Flickr page: 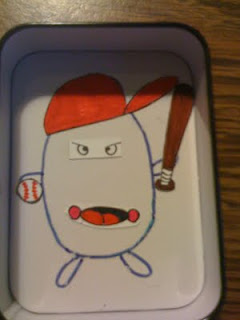 Oooo - angry eyes! And the bat might explain the dent to the box? 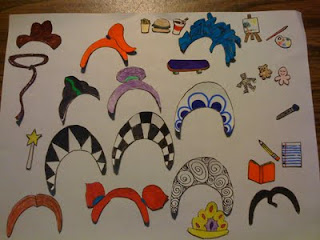 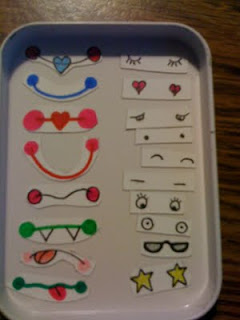 Isn't this a great idea!? Like a magnetic Mr. Potato Head. What fun. I may take a can opener to that little tin to get at all these cool little pieces - oh, the hair!

In the process of "borrowing" Vanessa's MYOLB images from her Flickr site, I discovered a dirty little secret about her! Vanessa is a Lilah Bean Addict! I found fabulous art devoted to LB - including a mural, no, TWO murals! And, now I know that she is a teacher. Perhaps if we clap loudly and say, "I believe in fairies, ah... Lilah Beans!" She'll become an author on this blog and post some Zentangle projects? Hint, hint?
Posted by Sandy Steen Bartholomew at 4:11 PM

Did the paint stick :( darn I hope you can get it open, it looks like it was damaged :(

hehe that is just awesome. Love the flickr photos too. The yellow brick lilabeans in my fave lol.
Deanne,
Sydney Australia

Did you get it open? I am really sorry it was damaged, I guess I should not have given him the ball and bat.... and I should have protected it better. It looks like it was run over or stepped on :( Really it was in one piece when it left here :(

Oh Snap! Now you've done it. My sister Zoe is plowing through my stash of Altoids boxes. So I guess I'm making her a Lila Bean in a box thingy.

Dad says he has some business card type magnets we can cut up. This will be interesting.

Girls LOVE sets of stuff. So do boys . . . maybe I could make a commando Bean. He could have a backpack and stuff.